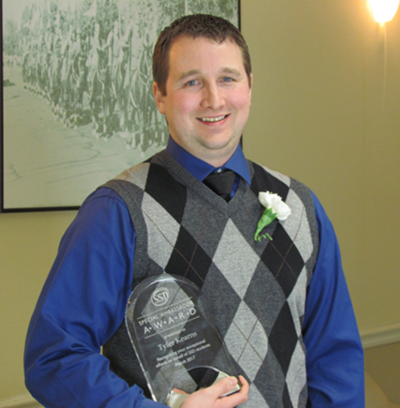 Clayton Kid Zone Coordinator Tyler Kearns was honored with the Special School District’s (SSD) highest recognition, the Special Ambassador Award, at the 2017 SSD Salutes banquet on March 8. This award is presented to community members who demonstrate extraordinary commitment to SSD students and/or staff.

Kearns was nominated for his passion for afterschool programming and for his unique ability to connect with his Kid Zone students. He works tirelessly to strengthen the program while building relationships with students, families and colleagues. As a result, Kearns has received numerous grants and awards, including the National Afterschool Association’s Next Generation of Afterschool award.

According to one parent whose child receives services from SSD, “Mr. Kearns clearly leads by example when it comes to inclusion and meeting the needs of all the students in the Kid Zone program--it is clear from the moment you meet him. I often comment that there is a lot that school day programs could learn from the inclusive practices and attitude in the Kid Zone program.”